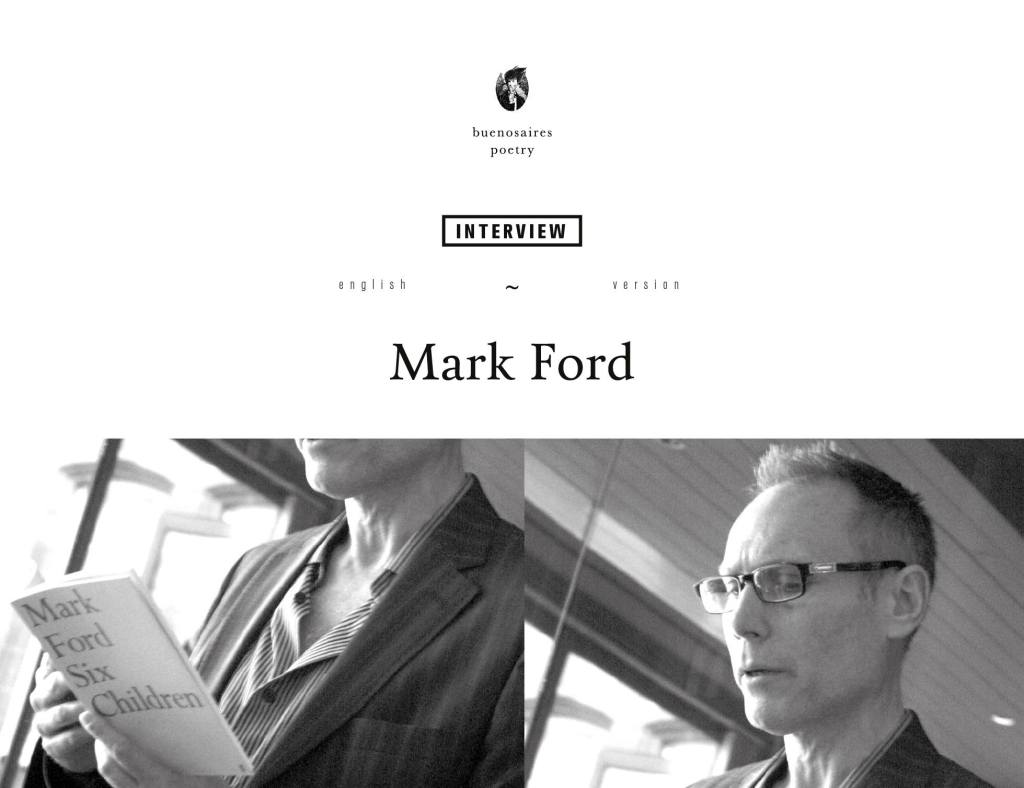 Mark Ford  (1962) was born in Nairobi Kenya, and earned both his BA and DPhil from the University of Oxford. His collections of poetry include Landlocked (1991), Soft Sift(2001), Six Children (2011), and Selected Poems (2014). He is the author of a biography, Raymond Roussel and the Republic of Dreams (2000), and a parallel text translation of Roussel’s last poem, Nouvelles Impressions d’Afrique (New Impressions of Africa) (2011), which was the runner-up for a PEN Award for Poetry in Translation from the PEN American Center.

J.A: This year, Coffee House Press published Selected Poems, a collection that includes work from your three volumes, Landlocked, Soft Sift and Six Children, as well as some new poems. I would like to ask about the criteria you used to choose the contents of this book.

M. F: I imagine poets who are more prolific than I am are thrown into agonies of uncertainty when putting together a selection of poems from three decades worth of writing. For me, though, it wasn’t that hard, since I’ve only published the three titles you mention; sometimes I feel bad about this, and wish I had more of the gift of the poetic gab, but other times I think of Philip Larkin and Elizabeth Bishop and reassure myself that it’s OK to put out a slim volume a decade. And few people wish that, say, Robert Browning had written more poetry … To be honest, that Selected is a pretty full representation of my oeuvre – I only left out a couple of poems from Six Children, which is the book I’m most proud of. Rereading Soft Sift I found a number of the poems a bit baroque and obscure, so I excluded those; Landlocked – well, I shouldn’t blow my own trumpet – but, on returning to it, it struck me as quite fresh and original, though the reviewer of this Selected in the New York Times declared the very first poem I ever wrote, ‘A Swimming Pool Full of Peanuts’, both my ‘greatest hit’ and my ‘worst poem’! The new ones were those I’d managed to finish in the years since submitting the manuscript to Coffee House Press and the moment that it got sent off to the printers. The very last poem composed was ‘Adrift’, which is about the relatives of various dictators – I really did get an email from Gaddafi’s widow – or someone purporting to be her – asking for help with her financial affairs. This one, I’m pleased to report, the review in the New York Times praised as ‘miraculous’. I wonder if I have got better, though – putting together a Selected is like a montage sequence in a film – your life flashes before your eyes. And it can feel somewhat daunting as far as the future goes, since you realize how many subjects, styles, experiences you’ve ‘used up’, which means it’s going to get ever harder to find new ones.

J.A:  Some of your poems like «Show Time» —a poem that narrates a Halloween night in Boston— or «After Africa» refer to specific ‘real life’ events. I would like to know: What role has your own experience in your poetic work?

M. F: When I started writing back in the mid-eighties I was very much in the ‘anti-confessional camp’, though oddly poets such as Lowell and Berryman and Plath were among the first that I’d read and enjoyed. Basically, I fell under the spell of John Ashbery when I first came across his work when I was about 21, and what I wanted to do was somehow be as cool as him. I loved The Tennis Court Oath in particular, though I never fragmented or cut up stuff the way he did in that book. I think Soft Sift is the book of mine closest in spirit to Ashbery’s work of the early 60s, my attempt to ‘plough under’ my influences, or at least put them through a fast-spin cycle, like clothes in a washing machine. It’s only quite recently that I’ve thought, ‘Hmm, there’s no actual law against referring to one’s own experience in a poem, is there?’ I should add, though, that a lot of the stuff in the ones that make use of things that actually happened to me are, in fact, invented; you refer to ‘Show Time’: I was mugged on Halloween night in Boston in 1983, but there was no one who shouted at me in a French accent and I didn’t overhear a Michael Jackson song etc etc. The same with ‘After Africa’; I was too young to remember what it was like coming to live in a London suburb after my early years in Nairobi, but I overheard my mother talking about it once to my brother. And a detail such as the red dust in the wheels of our toy trucks and cars is totally made up … and ‘Unreal’ – in the summer of 1984 I was drugged on a train from Barcelona to Madrid and had my passport, money, and shoes stolen, but other details are invented, or transposed from other experiences. I wonder – is this mixing of fact and fantasy legitimate? … what do you think?

J.A:  As a literary critic, but also as a poet, I would like to ask you: Where and when began your interest in the work of the New York School of Poets? Which do you think has been the contribution of this School in relation of the advances of the Beat Generation or Confessional Poetry?

M. F: It would have been the summer of 1981, when I was just 19, that I first came across the name of Frank O’Hara – the theatre director Simon Usher staged three of his plays at the Edinburgh Fringe – including Try! Try!, which I think terrific and put into my Knopf selection of O’Hara’s work. I was in an undergraduate play in Edinburgh myself, The Bed Bug by Vladimir Mayakovksy, who was of course one of O’Hara’s favourite writers; this was being directed by Cary Perloff, the daughter of the great O’Hara critic Marjorie Perloff, and, on the advice of her mother, we went to see these plays. A year or so later I picked up Houseboat Days in a bookshop and was immediately hooked on its rhythms and imagery, and the way that, say, ‘The Other Tradition’ looked roughly like a blank verse meditation by such as Wordsworth, but also seemed completely new, and unfathomable. New York had a magnetic appeal to me at that time as well, Warhol, the Factory, the Velvet Underground, Bob Dylan … As to your second question, it would take several books to answer that! O’Hara hung out with the Beats quite a bit, in fact, but certainly didn’t like Lowell – I’ve always thought partly because of the somewhat homophobic allusion to a ‘fairy decorator’ in ‘Skunk Hour’. The work of Ashbery, O’Hara, Schuyler, Koch has been immensely influential in America, and indeed all over the world, as a catalyst for the imagination, as both encouragement and paradigm. That seems to me part of its American-ness – ‘You too can do it!’ – which is what allies it with the work of the ur-father of American poetry, Walt Whitman. I suppose the big difference from the Beats and the Confessionals is New York Poetry’s insouciance, its communication of the idea that poetry can be hip and fun, rather than tortured or melodramatic or hysterical or a way of signaling one has the right political beliefs.

J.A: John Ashbery, when asked in an interview published in the first number of Buenos Aires Poetry,about Ezra Pound’s“Three kinds of poetry”, replied that he had never been a great reader of Pound, but considered “the kinds” relevant in the context and emergence of contemporary poetry.I would like to know your opinion about these “three kinds” in the field of contemporary literary criticism.

M. F.: You mean, melopoeia, phanopoeia and logopoeia – aren’t those just the sorts of terms that put people, certainly people like John, ‘off’ literary criticism altogether! I guess in the context of academic discourse and teaching they are quite useful, but mainly if one is talking about modernism. Logopoeia is, to me, the most useful of them, particularly for an understanding of the poetry of Jules Laforgue, to whom Pound originally applied the term, and also as a way of working out what’s going on in ‘Homage to Sextus Propertius’ or ‘Hugh Selwyn Mauberley’ – but I really don’t want to give your readers a lecture on early Pound. Non-Poundians may need to be told that by logopoeia he basically means irony, phanopoeia relates to the visual – petals on a wet black bough etc. – and melopoeia to the musical aspects of poetry. But when you’re writing poetry you don’t think about these kinds of things at all, just how to get the ***** thing sounding right; for me, literary criticism and poetry belong, in the main, to quite separate genres.

J.A: Finally… Do you think there are new forms and roads that still have not been explored and adopted in poetry?

M. F.: To the first – let’s hope so. Maybe every age feels all possible forms, styles, modes, dictions have been used up and that all the aspiring ephebe can do is wander nostalgically around the ruins. In our post-everything era that sense of belatedness is especially acute. I suppose technology will shape in some way the directions taken by future poets –the typewriter, after all, had a huge effect on the evolution of modernism, and perhaps digitalization will do the same for poetry of the coming decades. But there is also something atavistic about poetry, by which I mean it seems to connect with primitive or subconscious aspects of the mind, so any new types of poetry, however outlandish, will probably only last if they end up gratifying the same sorts of hunger or need or desire as were met by a Wyatt sonnet or Chaucer’s The Miller’s Tale.